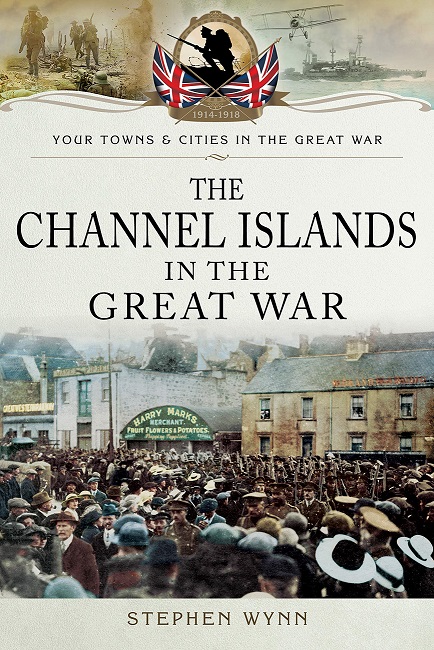 Before the outbreak of the First World War, the Channel Islands were viewed as they are today; scenic, sunny and relaxing holiday destinations, where it was possible to briefly escape from the hustle and bustle of everyday life.

As soon as the fighting began, the immediate worry was the threat of a German invasion to the Islands, which are much closer to the coast line of France than they are to the southern coast line of Great Britain. Both men and women alike played their part. Men by either joining one of the islands Militia or enlisting in one of the numerous regiments of the British Army, including the ‘Jersey Pals‘, and the men who served with the Royal Irish Fusiliers, the Royal Irish Rifles and the Royal Irish Regiment.

The book looks at the pride in the commitment and achievements of the Channel Islands’ very own Royal Guernsey Light Infantry, formed in December 1916. The Islands’ women volunteered in their droves to serve with the British Red Cross’ Voluntary Aid Detachments, but not just throughout the Channel Islands, but to mainland Great Britain, and further afield in Belgium and France and other similar theatres of war. As far as most people are aware, the first time German soldiers stepped foot in the Channel Islands, was when their troops landed unopposed in June 1940 during the Second World War. However, between 1915 and 1917, some 2,000 German prisoners of war, were held captive at the Les Blanches Banques camp.

The book closes by taking a look at the men from all of the Islands who voluntarily went off to war, and ended up paying the ultimate price and didn’t make it back home to their loved ones.